Chronic obstructive pulmonary disease (COPD) is a chronic and progressive condition, which means that there is no cure, and it often gets worse over time. With that being said, there are effective treatment options that can help you manage and reduce symptoms of COPD in meaningful ways. As such, if you are experiencing signs of COPD, you should seek medical attention for testing and treatment as soon as you can to prevent the condition from getting worse. We would be happy to provide you with testing or treatment at Dr. Luis Mesa, MD, in Aventura, Florida!

What is chronic obstructive pulmonary disease?


Chronic obstructive pulmonary disease is an umbrella term for two different pulmonary conditions that cause difficulties with breathing due to obstructed airflow from swollen or partly blocked lungs. The two conditions COPD comprises are emphysema, which involves damage to the lung’s air sacs, and chronic bronchitis, which involves long-term inflammation of the airways.

With COPD, the following occurs within the lungs:

The most common causes of COPD include cigarette smoke and long-term exposure to certain lung irritants, such as air pollution, chemical fumes, or dust. In rare cases, COPD may be caused by a genetic deficiency of a protein known as alpha-1-antitrypsin, causing the lungs to deteriorate.

What are the early warning signs of COPD?


Many individuals experience only mild symptoms or none at all in the earliest stages of COPD. As a result, many of those same individuals will not realize that they have COPD. With that in mind, it is important to know some early warning signs of COPD to pay attention to, which include the following:

What are the 4 stages of COPD?


The four stages of COPD are based on the GOLD system, which stands for the Global Initiative for Chronic Obstructive Lung Disease, and are classified as mild, moderate, severe, and very severe. The GOLD stages are determined through spirometry readings, the severity of your current symptoms, the existence of other medical conditions, and the chances that your condition will get worse.

With mild or stage I COPD, you may or may not experience any symptoms. However, if you do experience symptoms at this stage, they could include a nagging cough, with or without mucus production, as well as occasional shortness of breath, especially during physical activity.

Moderate or stage II COPD typically involves symptoms that can no longer be ignored, as they will likely impact your daily life at this point. Since mild COPD often goes unnoticed, people often first go to the doctor and are diagnosed with COPD at stage II. Some common symptoms of stage II COPD include:

Stage IV COPD is classified as very severe or end-stage COPD. During this stage, it is common to experience any of the following:

What will a pulmonologist do for COPD?

For more information about COPD or how our board-certified pulmonologist can help with COPD at Dr. Luis Mesa, MD, please feel free to give us a call! You can also schedule an appointment on our website. The clinic of Dr. Luis Mesa, MD, is located at 21110 Biscayne Blvd, Suite 405, in Aventura, Florida. We serve patients from Aventura FL, Surfside FL, Golden Glades FL, Andover FL, Miramar FL, Hollywood FL, West Park FL, and Miami Gardens FL.

Additional Services You May Need 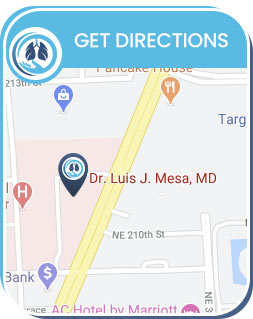 *In case of a life threatening emergency, immediately call 911.
**For any medical procedure, patients respond to treatment differently, hence each patient’s results may vary.
***Information on this site is not intended or implied to be a substitute for professional medical advice, diagnosis or treatment. All content contained on or available through this site is for general information purposes only.
****By using this website and sending us your information, you are giving us permission to contact you by electronic and non-electronic means. We also track the conversions and collect user data to improve marketing.
*****If you are vision-impaired or have some other impairment covered by the Americans with Disabilities Act or a similar law, and you wish to discuss potential accommodations related to using this website, please contact us.

How May I Help You?